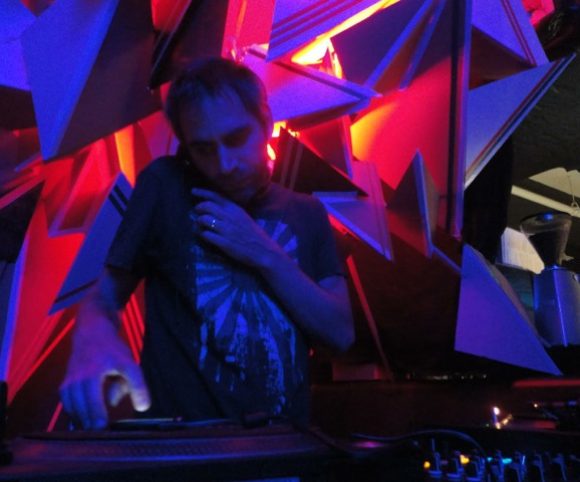 Sordid Sound System (AKA Stuart Evans) is a DJ and producer based in Glasgow. One of the founding members and an in house sound engineer at Glasgow’s Green Door Studio where he has engineered and mixed records for Optimo Music luminaries such as Golden Teacher, Mr TC, Whilst, Pussy Mothers and Junto Club.

Evans has worked on studio sessions with the likes of dub legend Dennis Bovell, Sly & Robbie / Brian Eno collaborator Howie B, and post punk guru Mike Hedges (The Cure, Bauhaus and Siouxsie and The Banshees). He also co-produced the ‘Youth Stand Up!’ LP on JD Twitch and Midlands Autonomous Africa label which came about from recording sessions in West Africa, Central America, and Glasgow, and which made the Vinyl Factories best releases of 2016.

After 9 years of honing his production skills at Green Door, Evans has recently started putting them to use sculpting the motorik dub disco sounds of Sordid Sound System. His first two releases on Glasgow’s Invisible Inc label are the result of overnight insomniac recording sessions committed to tape during studio downtime and exhibit Evans’s deep respect for producers such as Lee Perry, Conny Plank, King Tubby, Patrick Cowley & Adrian Sherwood.

Sordid Sound System are now a 3 piece live act with Evans dubbing the fuck out of an analog desk along to drum machine, synths, bass and live percussion. He also DJ’s at numerous nights and parties around Glasgow.